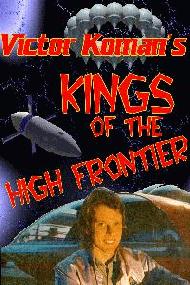 Pulpless.Comtm is proud to make this never-before-published novel available at less than the price of a paperback -- only $3.50! And that includes all applicable sales tax!

1 megabyte download
This edition is an HTML & graphics edition optimized for onscreen/offline reading by any web browser: Netscape, Microsoft Internet Explorer, etc. (This is the edition we've adapted for the OnLine Sampler.) You simply download the Zip archive, open the archive with PkUnzip or WinZip (Macintosh users can open the archive with Unstuffit or Download a Mac version of UnZip from us), and in the Files Menu of Netscape or other web browser choose "Open File" instead of "Open Location" to begin reading while offline! You can read it on screen or print it out with your web browser, choosing any type size or style you want!

The Epic Novel His Fans
Have Been Waiting For!

Prometheus-Award-winning novelist, Victor Koman, who sicced a dying assassin on God in The Jehovah Contract and imploded the abortion controversy in Solomon's Knife, now writes the epic novel of humanity's next stage of evolution: the jump into Space.

Tammy Reis, NASA Space Shuttle commander, works for the most highly funded, technologically advanced space program in the world. So why do nightmares of the Challenger disaster haunt her sleep? And why is NASA incapable of the stunning successes it once achieved?

Gerry Cooper struggles in a tiny spacecraft design company in the Mojave Desert. Who wants him stopped -- or dead?

Billionaire Laurence Poubelle wants to build his own orbital X-15. Can his keen marketing skills overcome a nation hostile to wealth and contemptuous of adventure?

When the great-great-great-great grand nephew of Davy Crockett secretly builds a single-stage-to-orbit rocket in an abandoned warehouse in the South Bronx, he blows the lid off the greatest conspiracies in the history of humanity.

Tammy Reis -- stripped of her astronaut wings for refusing a politician's orbital advances -- is recruited by the National Security Agency to infiltrate the cadre of a super-rich smuggler who plans to place an entire, pre-assembled space station into orbit with one single launch. When she discovers his secret plan, she faces an impossible choice between duty to her government or freedom from her nightmare.

"In case you, like others, have forgotten the Future, Victor Koman remembers it. He grew up there and now, with total recall, wakes us to jog our memories and rebirth Tomorrow. Would that there were a dozen more writers like him, in the field."
--Ray Bradbury
"An exciting, bracing look at a future some of us hope for, yet many fear. Hard-edged, tough-minded sf indeed!"
Gregory Benford
"The book of the month is a good novel by Victor Koman called Kings of the High Frontier. ... It kept me reading ..."
Jerry Pournelle, Byte Magazine
"The best science-fiction novel I've read in twenty years."
Richard Kyle, editor of Argosy Magazine
"This is a book that could not be suppressed. Unlike most of the books labeled science fiction today, Kings of the High Frontier takes the real world seriously ... but Victor Koman shows us that it's a world we can shape to our liking and even make infinitely larger, if only each of us makes the choice."
--J. Neil Schulman, writer of the Twilight Zone episode
"Profile In Silver"

Victor Koman has twice won the Prometheus Award for his novels The Jehovah Contract and Solomon's Knife, both of which have also been sold in German editions. He is also author of the "Spaceways" novels Jonuta Rising! and The Carnadyne Horde writing as John Cleve with A.J. Offutt, and his fiction and articles have appeared in Galaxy, The Magazine of Fantasy & Science Fiction, and New Libertarian.

Victor is also known as the man who organized the campaign which saved "Old Red," one of the original design monorails at Disneyland, which Disney saved from the scrap heap and put on a nationwide tour.

He currently lives in Southern California with his wife and daughter.

Read a Note From Victor Koman,
Author of Kings of the High Frontier,
explaining why his novel is available only from Pulpless.Comtm!

Review: "Liberty on the High Frontier" by Jim Davidson