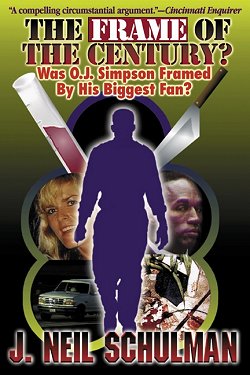 PDF Edition Available!
Order now and PDF will be sent by email.

The Frame of the Century?
J. Neil Schulman

O.J. Simpson was acquitted for the murders of Nicole Brown Simpson and Ronald Goldman. A civil trial found Simpson liable and awarded the victims’ families 33.5 million dollars. But what if O.J. really was framed and the frame-up had nothing to do with racism? What if the circumstantial evidence against Simpson was carefully planted by the murderer himself before the first police officer arrived? What if the person who framed O.J. was not an L.A.P.D. cop…but an obsessed ex-L.A.P.D. cop?

In a dramatic piece of speculative nonfiction based on meticulous research and personal investigation, J. Neil Schulman has done the sort of investigative journalism major newspapers are afraid to do anymore, and written a story with all the trimmings of a detective thriller…a psychological mystery… a religious revelation.

If you’re burned out on the Simpson case after two trials, over fifty books, and endless TV coverage…wait. This could be the first time you’re hearing what just might turn out to be the real story.